Giulio Faroldi, Vespasiano Gonzaga’s biographer and contemporary, states that the construction of the walls began in 15541.

The first phase of construction ended in 1568: on that date five out of six bastions were built (with the exception of San Francesco), in addition to the first part of the Duke Palace and Porta Vittoria. This configuration is attested by a heraldic image dated 1564-1577. During this phase, the moat was also excavated, with a water surface up to 35 meters wide.

As Faroldi reports, between 1578 and 1579 the second phase took place, with the construction of the last bastion and Porta Imperiale.

With the third and final phase, conducted by Bassano Tussardi between 1584 and 1600, the connection of the new bastion (San Francesco) and the bastion of Sant'Elmo was completed.

Between 1640 and 1690, Gaspare Beretta, military engineer of the Duke of Milan, built the "new covered road" (the walkway outside the moat and protected from embankments), as well as various upgrades to the warehouses and districts. With the aim of improving the external defences, he also promoted the enlargement of the moat.  The system of fortifications was also completed during the 17th century with two half-moon ravelins, one in front of Porta Vittoria and the other in front of Porta Imperiale.

In 1794 the castle was demolished, as shown by the evolution of the Theresian cadastre (1774) to the nineteenth-century cadastre (1854). In the 1920s, the municipal project of the demolition of the walls, promoted in 1914 and approved in 1919, was partially implemented. The passages to the north-east (via Pesenti) and south-west (via Giulia Gonzaga) were built, with the opening of wide breaches between the bastions of San Nicola and San Giovanni (1921) and between the bastion of San Francesco and the castle ruins (1924). 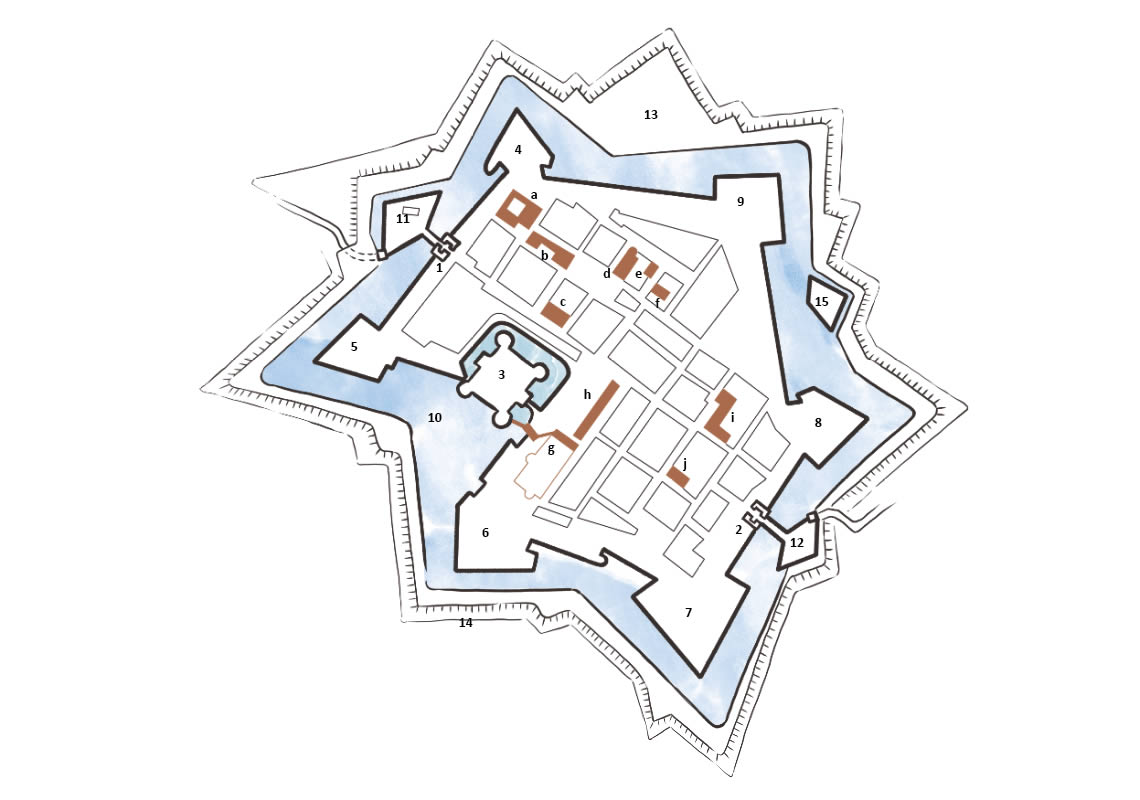 Between the nineteenth and twentieth centuries the moat was progressively reduced and diverted. If up to the Lombard-Venetian cadastre (1854) it was still represented in its original size, in the post-unification cadastre (cartography of 1923) it was already downsized, in a configuration similar to the current one. The same project for the demolition of the walls (1919) depicts it as a canal limited to the space immediately at the foot of the fortifications. Finally, the 1956 cadastre and a 1968 hydraulic redevelopment project prove further modifications, in particular with the shifting of the moat outside the perimeter of the San Nicola bastion and the ground on which stood the adjacent curtain wall demolished in 1921.

With the expansion of the building sector in the twentieth century, external defence works were gradually obliterated. In particular, construction was first carried out along the expansion routes of Via Giulia Gonzaga, Via Pesenti and Via Borgofreddo, and then in the area leading to the Panguaneta, while the old covered road was cancelled and replaced by the local and/or sliding road network, with the partial exception of the north-east front, where the weaving of the fields and the farm road network still partly follows the design of the earthen fortifications.

In the Seventies, the first Town General Plan became the expression of these requests for protection, drawing outside the walls a star-shaped area, where there is building ban as well as required maintenance of green areas, only allowing for restoration and maintenance of the existing structure and its surroundings.  In the following decades, through initiatives undertaken by the Council of Sabbioneta in cooperation with the National Office for Archeological Heritage, the walls underwent a series of conservation works and partial restorations.

In 2008 Sabbioneta and Mantua were recognized by UNESCO as world heritage sites. The urban planning council then introduced further and specific protections, beyond the landscape and the walled city, to create a wider "buffer zone" on the basis of an agreement stipulated with the Ministry of Cultural Heritage. The 2016 Territorial Plan of the Government reaffirmed and consolidated this plan.